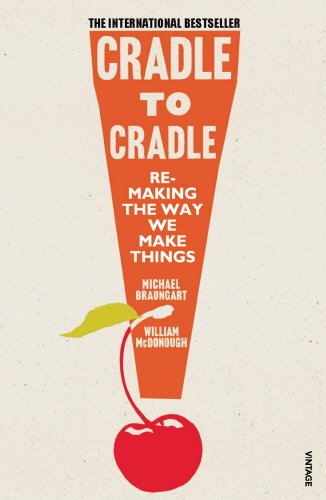 Michael Braungart and William Mcdonough wrote in their book Cradle to Cradle Remaking the Way We Make Things. They wrote, imagine what you would come upon today at a typical landfill : old furniture , upholstery, carpets, televisions, and so on as well organic materials like diapers, paper , wood, and food wasters. Most of these products were made from valuable materials that required effort and expense to extract and make, billions of dollars’worth of material assets.

They continued their point that all of those things are heaped in a landfill, where their value is wasted. They are ultimate products of an industrial system that is designed on a linear, one-way cradle – to- the grave model which the resources are extracted, shaped into products, sold, and eventually disposed of in “grave”of some kind, usually a landfill or incinerator. This system in the book is discussed as a system that dominates modern manufacturing, They illustrated that 90 percent of materials extracted to make durable goods in the United States become waste almost immediately. It’s even cheaper to buy a new version than to repair the original item. I felt this as well when I tried to repair some of my computers and printers in the retail store,there is also the lack of skill person who can repair item.

Michael Braungart and William Mcdonough illustrated that the model that we faced is called one size fits all or I called it universal model, one example has been the push to achieve universal design solutions, which emerged as a leading design strategy in the last century. They continued that in the field of architecture, this strategy took the form of the International style movement, advanced during the early decades of the twentieth century by figures such as Ludwig Mies van der Rohe, Walter Gropius, and Le Corbusier, who were reacting against victorian – era styles. Their goal actually was social as well as aesthetic. They wanted to globally replace unsanitary and inequitable housing – fancy , ornate places for the rich : ugly, unhealth places for the poor – with clean minimalist, affordable building unencumbered by distinctions of wealth or class.

They concluded Today what we see is their sealed windows, constantly humming air conditioners, heating systems, lack of daylight and fresh air, and uniform fluorescent lighting. There is always breakdown when it comes to the public, some thinking can be absorbed into a beautiful thing, and some thinking is misleading to bad performance. Even though the originators of the International Style intended to bring hope, but who use the style today mislead the message.

Moreover, The performance sometimes seen is just a style, an appreciation of beauty rather than performance because simply the generalization, the effort of our originator turned to be no effort by its predecessor.